AN UMBRIAN TOWN WITH A DIFFERENCE

In a region where medieval towns perched on hill tops – charming to visit with their narrow winding streets, but rather dark and claustrophobic as places to live – are two-a-penny, Città di Castello has a different feel. On the banks of the river Tiber, in a green, fertile valley enclosed by thickly wooded hills, the town is open and bright. The austerity of its own medieval past has largely disappeared (but thankfully not all the monuments, like the Palazzo Communale and the tall, thin, round bell-tower or Campanile Cilindrico) or been softened beneath the refinement of Renaissance and Florentine architecture.

The town is located in central Italy in the northern corner of Umbria, near its borders with both Tuscany and Le Marche, which lend their respective elegance and wildness to the region’s countryside.

Città di Castello is an ancient settlement, established by the Umbrian tribe centuries before the time of the Romans, to whom it fell and was renamed Tifernum Tiberinum (locals still refer to themselves as ‘tifernati’). The town was later destroyed by Totila and his Goths, then fell to Florence, Perugia (now its provincial capital) and a succession of condottieri (soldier-princes), most notably from the late 15th century those of the Florence-aligned Vitelli family (responsible for a great artistic resurgence and the strong Florentine influences).

From the Renaissance until the unification of Italy in 1861, Città di Castello was part of the Papal States (with the Vitellis as papal vassals), guarding the frontier with Tuscany. It is now the biggest and most important municipality in the so-called Upper Tiber Valley, with a total population of approximately 40,000 people in the town and its dependent rural areas (of whom some 7,000 live in the historic centre).

OFF THE TOURIST TRAIL

One key attraction of Città di Castello is that it does not feature highly in foreign guidebooks (perhaps because, despite its beauty, it does not possess any one particular monument or work of art that has been deemed a ‘must-see’), so — while it is the main town for foreigners who own houses in the nearby countryside — it is not overrun by hordes of tourists in the summer months, unlike many of its Tuscan and southern Umbrian counterparts.

Città di Castello retains the atmosphere of an authentic, working Italian town, not a tourist trap. Its restaurants and bars (which in the summer focus on al fresco eating and drinking in the town square and on the broad cobbled streets) are the real thing, serving traditional food that meets the high standards required by the local population.

Città di Castello is a town with a deep sense of culture, from its refined architecture, its very fine municipal art gallery (whose collection contains important pieces by artists such as Raffaele and Luca Signorelli) housed in the elegantly ‘graffitied’ Vitelli alla Cannoniera Palace, and its beautiful and active 17th-century theatre.

There is a steady stream of cultural events organised throughout the year. Chief amongst these are the annual summer music festivals such as the Festival delle Nazioni, a two-week extravaganza of concerts in spectacular settings that each year focuses on a different country, the Estate in Città (Summer in the City) festival that features regular events (mainly concerts, performances, screenings and workshops in music, theatre, cinema and art) from June to September, and the three-day Tiferno Blues. The town is also just 30 minutes from the provincial capital of Perugia, which in July hosts the internationally acclaimed Umbria Jazz festival that attracts top musicians from all over the world. In the course of the year, there are also numerous smaller events that give a real sense of regional culture, such as November’s three-day truffle festival and a variety of ‘sagras‘, or local festivals, in different zones of the old town that celebrate particular foods, traditional culture or the works of artisans.

FAMILY BUSINESSES IN THE THIRD ITALY

Città di Castello is a town of small- and medium-sized family firms. This is typical of the central region of the country, known as the ‘terza Italia‘ (or ‘Third Italy’), to differentiate if from the big-industry model of the north and the subsidized-industry model of the poorer south. Key local businesses include typography and publishing, packaging, and agricultural and industrial machinery. The local garment industry is also strong (Prada manufactures its global supply of men’s shirts in the town), as is the antiques trade and artisan production of wooden furniture.

Città di Castello is a great base for lovers of outdoor activities. The fabulous and unspoiled countryside of the Upper Tiber Valley is circled by the stunning Apennine mountain range, which marks the watershed between Italy’s Mediterranean and Adriatic coasts. It is ideal for trekking, biking and horse riding, as well as porcini, truffle or even wild boar hunting. There are also golf courses, not to mention pot-holing and canoeing and rafting and adventure trail options, and nearby skiing (not extensive, but fun) in the winter.

Città di Castello is the perfect hub for visiting some of Italy’s most culturally important towns and cities. The provincial capital Perugia is 30 minutes away by car, Rome and Bologna two hours away, and Florence 1.5 hours away. Ravenna, Siena, Gubbio, Urbino, Ancona, Assisi, Todi, Spello and Spoleto are just some of the other easy day trips in the provinces of Umbria, Tuscany, Le Marche and Emilia Romagna. There are train links up and down the Tiber valley, and to Rome and elsewhere (mostly via Perugia).

A number of international airports are within striking distance of Città di Castello, the nearest being Umbria International Airport at Perugia, which — along with free parking — has twice-daily flights to Milan (for intercontinental connections) and five weekly Ryan Air flights to Stansted Airport in the UK. Other useful airports include Ancona, Rimini, Bologna, Rome and Pisa, to which travel times range from 1.5 to 2.5 hours. 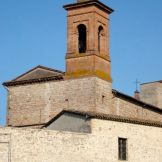 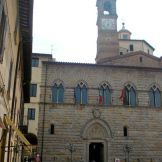